Still not even close to using up a whole ball of yellow DMC Cébélia size 30 -- I did another couple of practice butterflies. Had the first one been a sentence, it would have been overly wordy. Once I could see it wasn't going to properly behave, I stopped and cut off the thread in frustration. On to the second trial. Yes, that worked much better. Being pleased with it, I made the smaller one in Coats pastels quilting thread. I left it for a long time thinking it was done and started working on another pattern. Just about the time I was going post it as butterfly four, I decided it was too square. 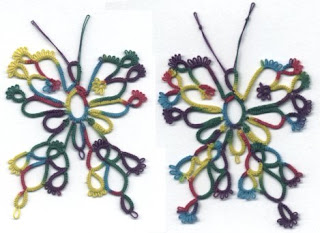 The next incarnation was made in Coats jewel tones quilting thread -- it's wings are slightly different from each other. It looked more like a water skeeter to me, but not disgustingly so. In fact, I liked it so much I just went on and did the next one with a few additional modifications. The final one I like quite well -- even if it, too, has a small waist and looks a little skeeterish. Maybe these will have to be butterflies 5a and 5b -- because now I've decided I like the square one after all. One thing I will have to do for this pattern is get a better picot gauge for the antennae. I used a package of needles and the cardboard was a little mushy. Might just as well have eyeballed 'em, they're so uneven!
The next job is diagramming what I actually did instead of what I thought would work for at least four of the five butterflies. My working patterns have more scribbles than even I can read. Might be best to just start over with new diagrams!
Posted by Marty at 12:26 AM 5 comments: