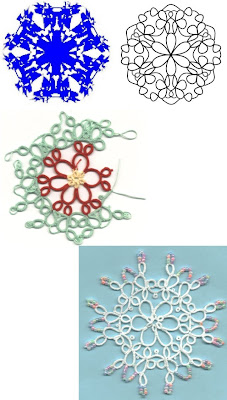 Sharon Briggs issued a challenge in her July 3, 2008 blog entry, this stuff is my response. The idea was to use the either the blue or the white shapes in the first image to create a snowflake. The second image is the pattern I came up with. Just like war where plans never survive an encounter with the enemy -- first patterns don't survive an encounter with the shuttle. At least, mine don't. The yellow red and green thing is an attempt to follow the pattern I outlined. None of the "repeats" are the same, rather, thry are a succession of variations. I quit when it looked like something that I might be able to actually build on (and ran out of green thread on the shuttle). The fourth little image is the complete snowflake -- which needed some adjustments because the mock rings really needed to be closed better. (Looks like gaposis has spanned the oceans...) Finally, the last image is, well, final. I didn't write down the pattern, but one of these first days (as soon as I can find that ever-elusive round tuit) I'll make a diagram that actually shows what I did, instead of one that shows what I thought might work. 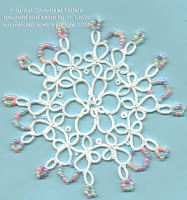 This was a fun challenge. Sharon is good at thinking up those -- keeps the tatting community on its toes (or firmly attached to our favorite tatting chairs) participating like mad. I don't know about other tatters, but these challenges are good for me. They keep me tatting, and for the first time ever -- designing (which I never thought I could do).