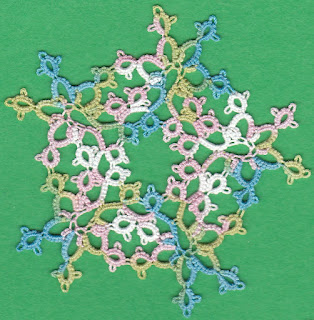 This is one of the motifs I made on International Tatting Day -- and scanned tonight.  Nothing if not timely, eh?  It's the first "Sternenhimmel" pattern from Susanne Schwenke's book SpitzenKreationen.

I have to admit my German isn't good enough to translate Sternenhimmel, but I don't feel too badly, because Google translate couldn't do it either.  Yahoo Babel Fish says it's "starlit sky"; Babylon says "the starry sky" and Microsoft says "sky".  I think they're stars (ones with 5 points) and snowflakes (the ones with 6 points).  They're all pretty though.

I've got others tatted, but they don't have all the spare threads tucked neatly away.  This one is made with size 10 Lizbeth "Wildflower" thread.  I think it works for stars -- stars are lots of colors.  I made three false starts on this one and I'm not telling how many times I unpicked various bits of it.  I like the look of the pattern, so I'll be making more.  I'll be paying better attention, though, and using not such wild thread.
Posted by Marty at 8:43 PM 7 comments: