Two views of the same ornament. The pattern is my first original ornament pattern, without the top and bottom caps. The thread is my sister's Dark Rainbow on a size 80 DMC tatting cotton base. Finally, the beads are pale green seed beads, but there are lots and lots of them. They are crowded together on picots separated by only one ds, and clustered in threes on other picots. It clacked and clicked while I was working on it and felt heavy when I was trying to pin it to the ornament.
I was informed when I was making this that the beads were too large for my thread. Well, okay. That would depend on what "look" I was going for, right? I was going for the beady look; the really beady look. This thing succeeds in that. It's beady, and it's going on our Christmas tree this year. It's not traditional Christmas colors, but we've got lots of other non-traditionaly-colored ornaments, so it works -- even with too-large beads.
Posted by Marty at 6:00 PM 2 comments: 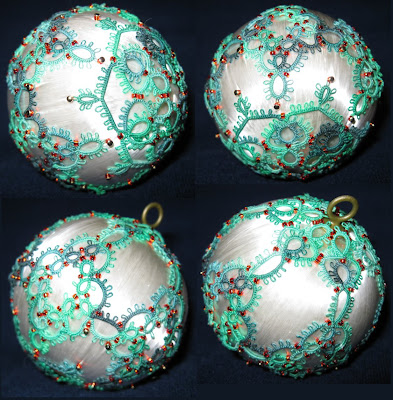 I had to wait until this one reached it's destination before posting it. It was part of the package I sent off for an InTatters Secret Santa Exchange. It seems that people have stopped taking pleasure in anticipation! Packages are being opened as they arrive (I can hardly wait -- until Christmas. I like to have things to open that morning!). Anyway, this ornament is not a secret anymore. :)

This one is adapted from "Ice Crystal" in Tatting Patterns and Designs by Blomqvist and Persson. It's made from my sister's Desert Green thread dyed on a DMC size 80 tatting cotton, and has red seed beads at the picot joins.

I think if I do this one again, I might make the bottom piece a bit differently so it would fit higher up in to the empty spaces left by the top piece. Still I do like this one.

I wonder how well the other patterns in the Blomqvist and Persson will adapt to ornaments? There's a thought. 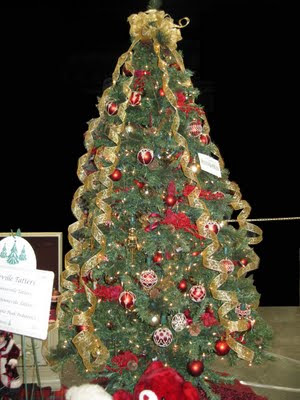 As I had created a few decorations for the tree the Bonneville Tatters Guild donated to the Festival of Trees, we went out to see the Festival. Fanciful trees, traditional trees, cheerful trees, mournful trees, big trees, little trees -- wow -- there were a LOT of trees, and wreaths and tabletop decorations. All of these things were being sold for charity. Many of them were sold at auction before the Festival began, and others still had "for sale" tags on them. The Bonneville Tatters tree was one that was sold at the auction to a local pediatric clinic. I got some pictures of the tree and ornaments, but not much that was very good of the rest of the display because in addition to all the trees and decorations there were people -- lots and lots of people! I took the liberty of cleaning up a bit of the background -- which was more trees and people -- so the tree could be seen. Isn't that pretty? The group from the Guild who did the decorating did themselves proud, did they not? There was also a group of teddy bears having tea, a treasure chest with tatting in it, and a beautiful doll with tatting edging her dress.

My other pictures have been severely doctored or cropped because, really, who wants to look at an odd body part or two, or a dozen stuck in with the ornaments? There are two of mine, one on a satin ball and one in a ring that I showed on this blog before I turned them in. There is also the one on a satin ball that is the adaptation of Cornelia that I showed in my December 3 post. If you look closely there's another burgundy ornament in a ring that I caught at an angle. I didn't even get a scan or picture of that or its two fellows before I turned those in (at the last minute!). The last two ornaments pictures are of some of the other tree ornaments made by the talented members of the Guild. 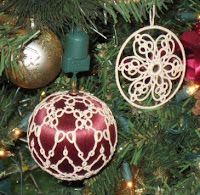 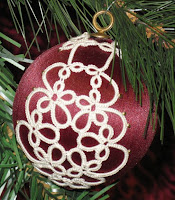 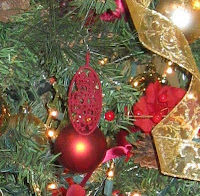 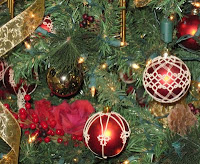 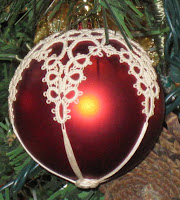 There's a bit of the tea table decor -- and I have to find out who did the lovely plate doily! And last, but not least, all the pretty laces that were displayed in the trunk. There are a couple of other photographs of items used at the Festival on the Bonneville Tatters website (under Christmas Share Potluck Party) if you're interested in seeing one of the teddy bears, the front of the trunk, and some more ornaments! 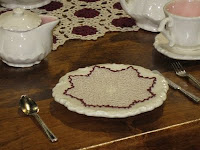 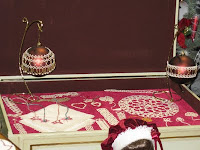 Finally, for anyone who stumbled on this by mistake -- looking for tattoos or something equally outré -- here ya go (my niece's favorite tree -- teenagers are beyond me): 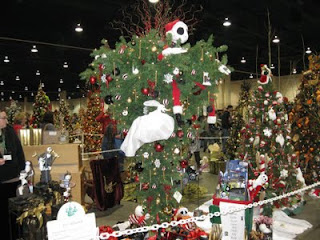