State Fair and me

Yes! I did enter stuff at the State Fair. We've got to keep those tatting categories that exist and see if we can expand them! I entered seven things in the Home Arts Department. I was going to enter my table cloth, but didn't get it finished. I'll show it to you one of these first days. :) I mostly entered the same stuff I put in the County Fair, so you've seen all the pictures, but the ribbons are a little different. Here are my entries. The only things I hadn't entered in the Count 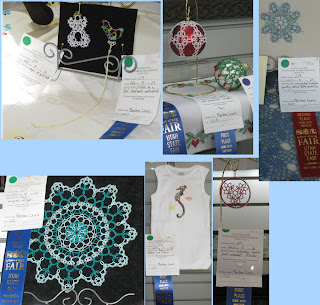 y are the Valentine hanging decoration, and the cockerel bookmark -- the state tatting section had categories just for "other holidays" and "bookmark". When I didn't finish the tablecloth, I made the Valentine ornament and the bookmark. They didn't take very long. Other than a white instead of blue on the angel and a red instead of sweepstakes on the quilting-thread Cornelia I got the same ribbons as at the County Fair. If you look at the picture you can see a green and white ornament with red beads. Isn't it pretty? I've blocked out her tag so you don't get to see her name, but she's got a spiffy blue ribbon to go with her ornament. I didn't take pictures of the other tatting (very self centered of me!), but I'll be tatting at the Fair again on Saturday so I think I'll take my camera and show you what everyone else entered. Personally, I think there's not enough! Everybody needs to enter so people stop thinking tatting is a "lost art" -- we need to show them we've found it!

Oh, yes, I very nearly forgot -- probably lack of oxygen from being so high up on my soapbox. I also entered stuff in the Creative Arts division. My jewelry did well. I got a first for my pendant and earring set, and a second on my earrings. I can hardly wait until we pick everything up so I can read all the judges remarks and find out how to improve my work. 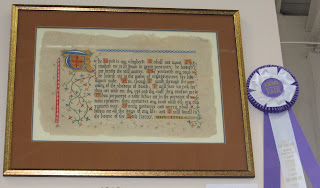 Finally, I had a very nice surprise in the Creative Arts building. You might remember the Fine Arts judge at the County Fair said I should have entered my 23rd Psalm illuminated calligraphy in Creative Arts. Okay, I did so. I forgot I'd entered it (too many things to remember) until Bonnie pointed it out. Oh, nice! There it was hanging in the corner reserved for Best of Show. I got a "big ribbon"!
Posted by Marty at 8:54 PM 10 comments: 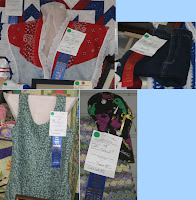 You all know what a talented sister I have when it comes to dye -- I think there should be a category at the Fair for hand-dyed thread, but so such luck. Bonnie does lots of other things, and does them well.
She entered four things in the sewing categories: a sleeveless, drop waist, green dress, a baby cap, a vest, and a large bag. Bonnie got blue ribbons on the first three and a red on her bag. The vest wasn't displayed so that one could tell it was made of a pair of jeans, a bandanna and a bit of lace. The jeans are turned upside down and the legs become the front and back of the vest, with the bandanna acting as a yoke. The waistband of the jeans is the waistband of the vest and the button is still there -- of course the zipper is gone (it would zip the wrong way anyway). Her bag is another pair of jeans with the legs cut off, it's also fully lined. The judges left it unbuttoned and with the fly open!! 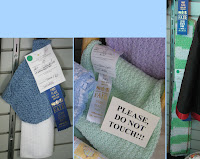 Bonnie crochets (left handed, amazing to me!) and entered a washcloth and matching

hanging towel set, a really,really long scarf, and a baby afghan. Two blues and a white on that lot. I think the baby afghan is really pretty, but I guess it must be too plain for the judges. Plain is good for babies because when they do those things babies do, it can go into the washer and into the dryer and still look just like new.

As I mentioned, Bonnie dyes things. The judges liked her tie-dye on this rayon caftan-shirt and showed it with a pretty blue ribbon. Me too -- I got some thread the same colors!
Posted by Marty at 9:30 PM No comments:

State Fair and the Family!

Don't look for any tatting here! These are things that my nieces and Dad entered in the fair. I belong to a talented family -- yeah, I really, really do.

who's eight, entered her tie-dyed dress in the Creative Arts. She didn't make the dress, but did the fold and dye herself. She competes in the Junior category, which is up to age 14. She got a pretty red ribbon for her entry. She was disgusted that they never give the "big ribbons" to kids.

Allix entered her pottery in the Creative Arts section. Because she's 15 she has to compete with the adults. She got a first on her blue pinch pot vase (which looked purple under the lights at the Fair!), a second on both her coil/pinch pot and her sgraffito (at least I think that's what she called it) box. Her turtle pile sculpture, which 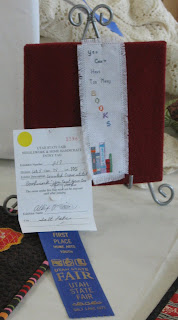 got a first place in the County Fair, got a third place ribbon at the State Fair. All-in-all, she did really well.
Allix did get to compete in the junior section in the Home Arts, because that is up to age 17. She did this really nice cross-stitched bookmark. It's the first thing she's ever cross-stitched and she changed one of the books at the bottom so the spine read "Inkheart" which is what she happened to be reading at the time. She got a first place on it. Pretty impressive for a first piece! 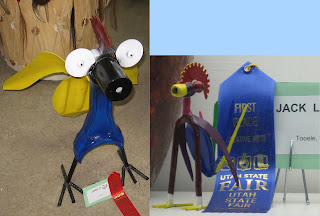 He always welded, but before he retired it was for fixing and making useful things. When he retired, his welding became fanciful. Now he makes birds and dragons, and lizards and snakes (we don't mention the cat). This year he entered two pieces in Creative Arts, one in Over 18 Inches and one in Under 18 Inches. The Over 18 inches bird is about two feet tall and made of semi-truck parts, an old shovel, a piece of saw blade, washers, rebar, and ball bearings. He had some trouble with the paint sprayer, and this one was too big for the tiny brushes he uses on the little birds, so he left it. He got a second place ribbon on the big bird and a first place of the little bird, which is made of a spoon bowl, three spoon handles, little ball bearings and other odds and ends.