If you need to know how to do one, do it well, and do it easily click on over to Le Blog de Frivole!  She has posted two videos of Marie Smith's method -- one for regular tatting and one for fs/bs tatting.  I tried both last night.  Oooooooh, WOW!   This is hands-down the neatest, easiest method I've ever tried.  Even I can't tell which part of the chain was the direct-tatted side on my own work!
Thanks so much for posting this, Frivole, and even more thanks for sharing it, Marie.
Posted by Marty at 9:18 AM No comments:

Email ThisBlogThis!Share to TwitterShare to FacebookShare to Pinterest
Labels: Technique

Actually I took five -- classes that is.  I learned something in all of them -- sometimes it was that I'm all thumbs or can't count or don't know what tension is or that I was wearing my brain backwards (apparently).  What fun!

Sherry Pence is so patient -- she explained how to make Ruth Perry's mock hairpin lace strip a number of times, and in enough different ways that it finally sunk in.  Mine was just not working out.  Yup.  One of the non-counting moments.  Once I got down the 1 and two and 1 and 1 and two ... or was that three?  Whatever, count correctly, put the picot in the right place et voilà!  Putting the strip into a round shouldn't have been at difficult as I made it.  Again -- a non-counting moment -- I missed putting one of the down picots in the center tie.  Had to cut that out and re-tie it.  When I got it all finished, I decided I should probably have either loosened the tension on the outer round or made the picots a bit smaller.  This is as it came off the shuttles.  It might look better if I blocked it.  It's an interesting technique, so I've been thinking about another way to use it.  That's just in the thinking about it stage -- not the doing it stage.

Krystledawne was such fun as a teacher.  She told us this was an embarrassingly easy pattern.  It turns out looking like something really complicated and so pretty!  I don't have the one I made in class.  It was pink and blue and made for my youngest niece.  Sometime between when I left home, spent a weekend in Spokane and arrived back home, she's gone from the pink phase to the purple one.  *sigh*  I cut all the pink and blue off and made this bracelet from her selected purple -- the same one I used for the mock hairpin lace.  Krystle also told us that picots or beads could be added for a little extra pizazz, so I added these size 11 purple beads so the sides for my niece.  I was lucky to wangle it away from her for the photograph.  She's in the kitchen doing her math homework right now -- and the bracelet is around her ankle.  :) 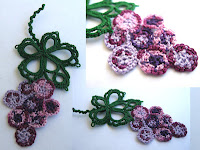 These little grapes were another real ah-ha! moment.  It couldn't really be that easy, could it?  Nah, it couldn't.  The concept is remarkably easy as Karey Solomon explained it.  She was using a size three thread to show how it worked.  Looked simple for her.  I started over once, and a couple of these are joined a bit oddly, but, I can't tell you how delighted I am with them.  They're grapes -- really! -- don't they look just like grapes?  I don't think I attached the leaf quite correctly, and it, too, might look better for a bit of blocking.  I can see all kinds of applications for this technique.  Isn't it interesting how one person can know making wheels and the alligator join and turn them into this and another person can know the same thing and never put that together?  Aren't we glad there are designers out there?

The fourth class I took was one of Dale Pomeroy's snowflake classes.  The first picture is the one I completed from class (another victim of a person who can't seem to count) and the second one I completed at home.  I really liked the look of this snowflake and wanted to play with those bugle beads.  There were interesting techniques used that I hadn't tried before -- like putting the beads on the thread and sliding them into place then working under the bead for a join that appeared to be a picot join, but which put the bead higher out of the tatting.  Just to see the difference, the one I did at home I did as a regular picot join with the bead added at the time of joining.  It's a very pretty snowflake -- and once, again, would benefit from blocking!

You can see the benefits of my last class with Jessica Spaulding:  Photographing Tatting.  Yup -- not a single one of these was thrown on the scanner and none were taken inside.  Outside in natural sunlight.  Jessica looked at my poor point-and-click camera and said I'd have to do the best I could on automatic.  No f-stop settings or whatever for me.  That's okay, it's what I can afford right now, and it does have a macro setting -- that was good.  She also showed us how to make a light box -- a really inexpensive one with a cardboard box, tissue paper and a piece of poster board.  I haven't done it yet because I'm waiting on a suitable box.  After Christmas we threw out all the spare boxes -- so we could start collecting new ones.  When a good one comes along, I'll save it from the recycling bin and be in business.

Whew!  I really had a great time and feel like I learned a lot of new stuff.  Y'all should come next year -- wouldnt' that be great?
Posted by Marty at 8:37 PM 9 comments: