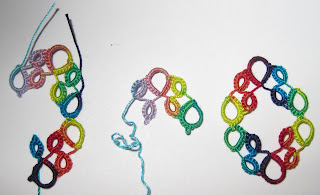 Roll tatting seems to be all over the tatting blogs these days. That's means it's time to learn. I borrowed Mary Konior's book "Tatting Patterns" from a friend lucky enough to have it. One of her fragments patterns is called Almond. It's got roll tatting and bare threads. I started with a partially filled shuttle and it was going okay, until I ran out of thread. Drat. I wound on a bunch of thread and started again. Do you know it's very nearly impossible to unpick roll tatting (even if you cuss)? I had the ring partly open but broke the thread anyway. Okay. Start again. Ta-da! Not perfect, a little lumpy, but finished. Coincidentally, the thread worked out so both end rings are red and purple and the colors are on opposite sides. I thought that was really a nice touch. This is my sister's dark and light rainbow hand-dyed thread -- the Almond is small enough that it ended up being all dark rainbow! Makes it look like I very nearly know what I'm doing. Oh, and the magic threads worked a treat -- the ends just disappeared.
Thank you to all of the tatters who have gone before me and blazed the trail to roll tatting -- where I could see it. I learned a lot from them -- like the roll has to transfer just like the ds!
Posted by Marty at 11:05 PM 6 comments: