Making butterflies out of Sulky thread was sometimes an exercise in frustration.  Trying to get six stitch rings to close nearly made me nuts -- my fingernails kept getting in the way!  I've got three butterflies done that I'm going to use on an ornament.  The rest of the space on the ornament will be filed in with smaller butterflies of one sort or another. 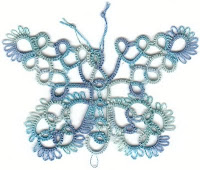 This one is "Celine" from Tatted Butterflies by Adelheid Dangela.  It needs to be blocked to get the body to be straight and the lower wings the right shape.  It wouldn't hurt to get the antennae straightened out either.  They're clipped at the end because I wrapped the thread around the picot two more times on one than the other, that meant to make them even I had to trim the ends.  It measures 1.25 inches (about 4.5 cm) wide wingtip to wingtip, and one inch (about 2.5 cm) tall without measuring the antennae. 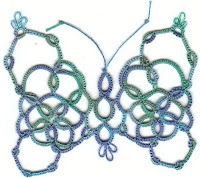 "Jade" is from Sherry Pence's The Exquisite collection of Tatted Butterflies II.  It would have been prettier if I'd followed the pattern.  There would have been a more defined point at the bottom of the wings and a nice picot there, too.  I was talking while tatting and didn't count twice -- close once.  As a matter of fact, I didn't count or look at the pattern until after I'd closed.  After looking at it for a dismayed minute or two, I decided there was no way I was even going to attempt to open that little tiny split ring!  I just made the other wing to match.  This one measures 1.25 inches (4.5 cm) wide and 1.5 inches (just under 4 cm) at its tallest point. 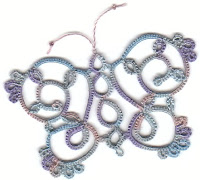 Finally, I made "Curly Q" -- another little treasure from Sherry Pence's book.  All those tiny rings in this fine thread gave me a lot of "aaaarrrrrgghhhhh" moments.  It's such a pretty little butterfly, though, so I kept at it.  It measures about 1-3/8 inch (3.6 cm) at it's widest point and about 7/8 inch (2.3 cm) tall  It also needs some blocking.  I'll take care of all that before I stick them on the ornament.

Depending on how it looks once I get them placed,  I might even make one more larger butterfly -- probably "Lily" from Sherry's book.  If I do that, I'm going to consider placement of magic threads very carefully.  This Sulky is too fine for me to weave the threads in with a needle.  I don't own a needle thin enough
Posted by Marty at 9:44 PM 9 comments: