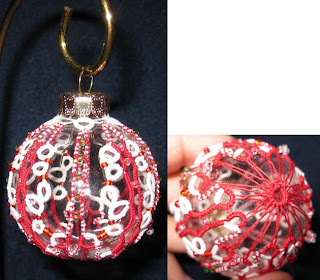 TA-DA! I did it twice. Now I've got a matching set. This is the same "Lock Chain Ornament" pattern as the green one -- it's just made with red instead. See? Much easier to get these smaller things done, because I only use four repeats of the pattern instead of six. It's finished off with that same single ring with all the picots, too. Oh, this is also Lizbeth size 40 thread.
I don't think the pattern actually shows very well in the picture, because you can see the other side through the glass ornament. It looks really pretty hanging on my metal tree thingy, though.
I've decided to make a bunch of these for a present, so I've ordered a metal tree (actually, it looks like a naked branch) for them. This way, I'll get my challenge done, and have something useful to do with the results. Of course, once I give 'em away, they aren't my storage problem any more, right? That means I can add to my stash. Oh, yeah!
Posted by Marty at 7:56 AM 2 comments: 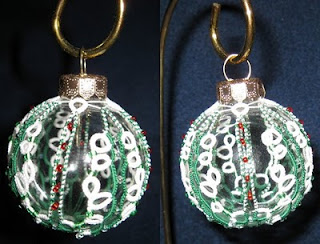 This is Number 5 for my 25 Motif Challenge. Yes, okay, that's what I said: 5. I know it's July and I should be more than half-way through. I'll get there, eventually.

I might actually make it in time thanks to MSquared. I joined into a discussion on InTatters and we got around to how Mike attaches his tatting to ornaments on which you can't use pins. I tried fussing with stuff like taping the darn things to the ornament then lacing and trying to do a little weaving in the center of the bottom where all the threads cross. Uh-huh. There were a zillion little threads in the trash after that fiasco. I tried making a matching bottom and lacing them together. That works, but it's a pain in the patoot to get both sides to stay the right shape and in the right place.
This little ornament was the result of my first attempt at using one method Mike mentioned. It's all done with the magic of making one little ring with enough picots to correspond to picots on the cover. I know when I say it you all think, "Well of course! That's such a simple thing." Yeah, well so was the picot join -- once somebody

else thought of it! Anyway, it should be no wonder to anybody that I like Mike! With this one little bit of inspiration, I might actually get 25 ornaments covered in a year.
I do have to admit, these are not the extremely inexpensive (oh, okay -- read "cheap") ornaments I was going to cover. Even tatting couldn't make them look pretty (amazing, eh?). This is one of a set of 1.75 inch glass ornaments I bought. I also have to admit that the small size makes the prospect of doing 25 easier to envision, as well. In fact, that size was so inspirational I went out and purchased a box of 0.75 inch ornaments this weekend!
THANKS, MIKE!!
Posted by Marty at 10:59 PM 3 comments: