It's hart to believe it's the end of November already -- I've been AWOL for 3 months!  I don't even have a really stellar reason.  It would be nice to say I won the lottery and have been on a world cruise and just too busy playing to blog.  Nope.  I didn't win anything; I've been right here at home; and I've been too busy working to blog.  Borrrrrrring!  On the good side of that my assignment at work has changed so that I just get to do the part I like -- all the rest of the stuff I used to do someone else is now doing.  Lovely.  Now I have to step into the Wayback Machine and show you what I've been doing for three months -- because I have done some tatting.  :)

How about the Fair, for starters?  I got some blue ribbons (1st), some red ribbons (2nd) and some pink ribbons (4th).  In ascending order then, I got a 4th place ribbon on my ankle bracelet and my hat (which for some reason shows as a pillowcase on my "premium statement" from the fair).  The ankle bracelet is the same one I entered in the county fair.  The hat is all new.  I made the initial just for the hat, but the top is decorated with one of Jon Yusoff's snowflakes.  Both are made in size 80 thread hand-dyed "Oh, Baby" by my sister.  The judges comments -- that I was hoping would be helpful -- just said "nice" and "precise tatting" for these.  *sigh*

The Heart's Desire bookmark is also the same one entered in the County Fair.  It got a second place ribbon at the State Fair.  I also entered my little crocheted Cthulhu toy which got a red ribbon.  The funny little guy has wings, arms and legs, but he's buried here in someone's quilt, so it looks like he's only a head.  He's being shipped off to the far reaches of the world, as soon as I find a spare minute to stand in line at the post office.

I got nice first place blue ribbons on the button doily, and the Easter and Christmas ornaments I also entered in the state fair.  The coaster I entered got a blue ribbon as well.  It's the square I designed in Sharon Briggs' Design Tat Class.  She teaches well!  I made it again in purple size 30 DMC Cebelia.  I've made four now so I have a small set of coasters, but I only entered one. 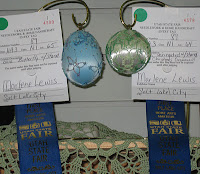 I was very pleased to have gotten a first place ribbon on the large centerpiece I adapted from a Jan Stawasz pattern.  I left out all the picots except the joining ones.  What made me so happy is that entry morning when I took it's picture, I noticed that I had missed a couple of joins -- there were the picots just hanging out there.  It's such a large piece that either the judges didn't see them or figured they'd cut me a little slack!  It's the same doily on which I reported not much progress last June. 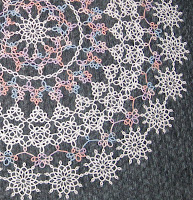 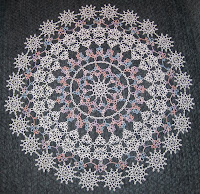 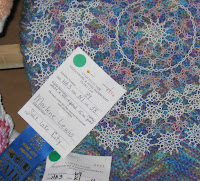 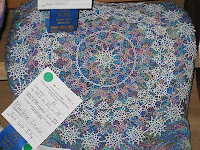 The first two pictures are those I took the morning we were taking things to the fair.  It did turn out really pretty, I think.  I was just upset that I had missed the joins.  I still haven't decided whether or not to try to fix it, or just figure, nobody's perfect and a man on a galloping horse won't notice anyway.  The second pictures are the ones I took at the fair,  after  I convinced the fair people to move it .  It was originally displayed draped over a white knitted something, and it completely disappeared -- not to mention I spent hours getting it blocked just right and they rumpled it all up.  I have no idea how the owner of the afghan they finally placed it on felt about having her work covered up.  *sigh*  I wish they had a bigger building!


The last thing I entered in the fair was over in the Creative Arts area.  It's a bit of Calligraphy in the Celtic style.  It got a blue ribbon, too. 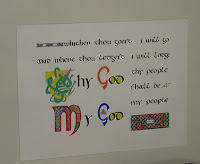