The only other things I entered this year were not tatted.  I entered these two crocheted doilies:

Now I have to decide which to enter in the state fair, because they turned out to both be in the same size category and I can only enter one in each category at the state.  Which do you think I should enter? 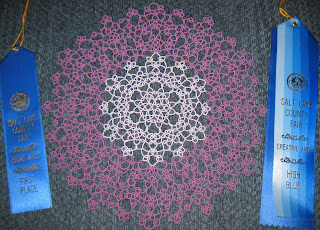 The center is the same as a number of others I have sitting around the house -- I did a lot of testing on this split chain thing!  I'd get something I rather liked then start over and somewhere along the line think, "Oh, wait, I could change this bit -- that would be better for this round."  Yes, but once one round changed, all the others after it had to as well.  I didn't write down a pattern either.  *sigh*


I had intended to make another round (of however wide I could get it without breaking the thread ) in the light purple.  I lost the ball of thread.  I looked everywhere I could think of -- though I will admit I didn't look in the fridge or the toilet tank.  (Maybe I'll check those tonight.)  Anyway, being frustrated by the thread I stopped and blocked it.  Must be okay, because it got a blue ribbon and a high blue (considered for sweepstakes) ribbon.  That made me laugh, because I don't like this doily nearly as well as some others I've made, but it is the one that blocked the best!
Posted by Marty at 4:30 PM 9 comments: 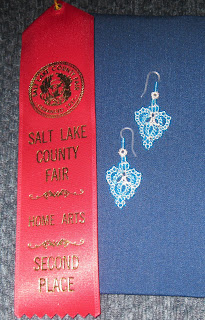 These earrings are my first try at Beanile lace tatting.  I used one of Nina Libin's free patterns.  They're made with Oren Bayan silver metallic thread and forty-bazillion size 11 blue glass seed beads.  I had to change the top a bit to get them to work on my "mommy earwires" (which are not wire, but nylon).

As you can see, I got a nice second place ribbon for them.  The comment card said "beading should lay flat, so work is too tight"  Yes, I wondered about that.  I seem to have to add a stitch or two here and there to various patterns to get them to lay flat.  That or block the bejabbers out of 'em.  These I didn't block at all, so I think I'll be taking them off the card, blocking, then putting them back on the card for the state fair.  Unless I find a spare few hours to make new and better ones (as if).