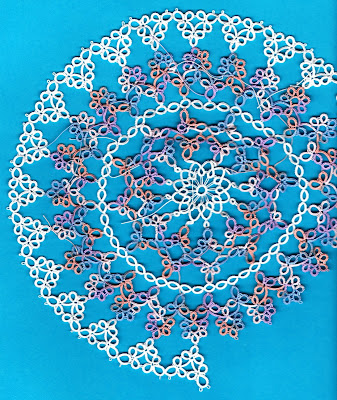 Hmmmm...April 1st is International Tatting Day.  I think I missed posting, because it's after midnight now, so I guess it was April Fool's Day, too.  I did tat, though.  I've got this doily thing now out the the fifth row.  It needs another bit of blocking, but I've decided to wait until I'm done.  That's why you get to see this rumpled work.  I just tossed it on the scanner.  It's the same Jan Stawasz pattern I've been split-ringing into single rounds instead of individual motifs.  All those threads have been woven in, but I'm leaving them at least an inch long until I'm finished.  I'll snip those off after it's blocked.  The thread is size 40 Lizbeth in white and "Cotton Candy".
I didn't actually do so well with ITD because I didn't tat in public.  The only place I went that could be considered public was lunch.  I couldn't tat at lunch -- especially not in white!   Oh, wait, I went to the toy store, too.  We weren't there long enough to tat.  I was shopping with a munchkin who knew exactly --very exactly -- what her friend wanted for her birthday.
Oh, I didn't eat any chocolate either.  I don't much like chocolate.  {waiting for the gasps to stop and some of the more delicate personages to wake from their faints}  Okay, long enough.  Move along -- nothing more to see here!
Posted by Marty at 12:50 AM 6 comments: