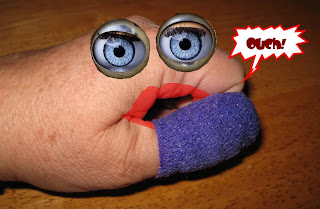 No tatting for a little while. I did an oops. Monday night I was slicing bread for supper. That's not all I sliced. Really, I can't imagine how my thumb came to be there -- not at all, really! What was it thinking?! I think thumbs must not have any brains -- at least mine don't. My sister took me and my thumb down to the "InstaCare" (what a misnomer -- we were there more than an hour and dinner was ruined). First they made me wait behind curtain number 2. This guy whose razor hasn't worked for at least three days must have been the winner. Oh -- nope. He was the doctor. He filled my thumb full of lead...er...no,no, he filled it full of some kind of numbing agent. He did it with a NEEDLE (shudder) . Sadist. Then he demanded someone set up a suture kit for him. (He apparently couldn't open the cupboard and take out a box and put it on the tray by himself. I hoped it was a sign he was just uppity -- not inept. He was gone forever. I thought might be thinking the box would open itself if he waited long enough. Nope. He finally came back, then spent 10 minutes complaining that it was some kind of disposable kit. The nurse told him they were out of the regular kits and this was all they had left. His response, "Well, that's not a good enough answer." What kind of answer could he want? They all ran away from home? There really are some of the others, but we don't like your patient? The others are being saved for the best doctors? Doesn't matter -- that's the only answer they had to give him. Grumbling, he decided he could use "that piece of crap". Great. I want my thumb fixed with crap -- oh, yeah. Still, fix it he did. Stitched it right up, and tied the knots with a couple of hemostats. It was beautiful to watch him tie those knots -- 30 years experience, he said. "Wow," says I, "I'd certainly like to have a couple of those hemostats." "Why would you want 'em?" he mumbles. "Oh, because I can use them with my tatting!" "Whazzat?" he says. Heathen. I told him it was lace making with a bunch of little knots, and I could use those for short thread joins and stuff. He looked at me like I was speaking Ancient Egyptian. (I could have told him tatting wasn't that old.) Still, when he finished he told the nurse to give me the hemostats -- since they were disposable anyway (maybe they melt in the autoclave?). They didn't look disposable to me -- see:

I should get the stitches out next Monday. Plenty of time to still demonstrate tatting at the State Fair!
Posted by Marty at 8:55 PM 15 comments: