Ribbons from the Fair - part 6 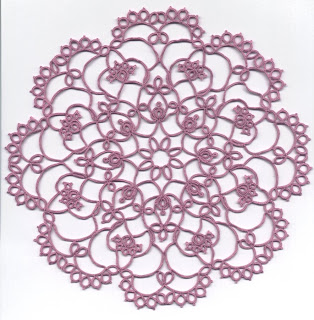 "Delia" from Tatted Doilies by Iris Niebach. I finished this one back 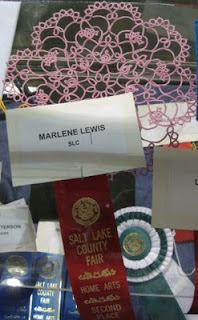 in May and thought it would be perfect for the Fair. I did a little more blocking on it, but I don't think it was enough. The judges didn't love it as much as I did -- they loved it second-place worth, though. That's good, but means I don't think it's going to be making the trip to the State Fair this year.
It doesn't mean I'm going to stop making Iris Niebach patterns -- they're still my favorites (in fact -- my copy of Tatting Fantasia 3 came the other day!)
Posted by Marty at 5:00 PM 6 comments:

Ribbons from the Fair - part 5 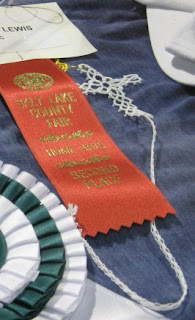 Julie Patterson's "Hearts and Flower Cross Bookmark "was made for a friend of mine (she's still waiting for it). You can see how it looked at the Fair -- sorta rumpled up in the case. Poor little thing (it got a smudge on it too, so I'll be washing and reblocking it). I entered it as a Wedding Accessory -- a bookmark for the bride's Bible.

That's its second place ribbon just about overpowering the bit of tatting. I'm not certain why it got that, because the comments just said "nice work." Yeah, Fair judges -- way to keep me humble. (Ooooo, I sound like a whiny brat!)

The pink background over there is what it looks like stretched out on my scanner. I don't do tassels well, and it has to be shipped off to another state. I wanted a tail that would lie flat in her Bible and not get too bent up during shipping. This one is made of button cotton in perle tatting over an inner thread, and ending with a tiny split ring cross.
Posted by Marty at 5:00 PM 3 comments:

Ribbons from the Fair - part 4 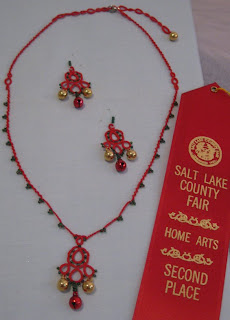 This is my sister's Christmas jewelry set -- made from a Yarnplayer pattern called "Dream".

I originally entered it in the "Creative Arts" section of the fair as "Jewelry - mixed media". Well, that's what it is. After we were all done, the person taking in the entries decided that tatting didn't belong in creative arts or in the jewelry. She took it all over to the "Home Arts" area and they just wrote in new tatting categories for it. *sigh* Mine was the only tatted jewelry entered, so I competed against myself. I do wish it had been left to compete with the rest of the jewelry. It will be in creative arts as mixed media jewelry for the State Fair, because they don't just write things in if they feel like it.

Bonnie used to have an inexpensive necklace with these little bells on it that she wore at Christmas. One of the girls decided that the bells would look better used another way and ...well... chopped it up. She rescued the bells, but no longer had any jewelry. With as many bells as she had, I was able to make her two sets: one red and one green.

Good thing I entered the red set -- the only green ribbons they give out at the fair are those big sweepstakes ones! Of course, red ribbons with the green set would have just looked even more Christmasy, wouldn't they?

I suppose when I give the set back to her I could give her the ribbon, too. She could tie it over her ear. ;)

Oh...I apparently need to practice my chains to because they judge said they are all inconsistent. *sigh* Actually, what I read on the note was that the "chair types were inconsistent". I looked at it blankly and thought "What chair?" Rest...I need rest.
Posted by Marty at 5:00 PM 5 comments:

Ribbons from the Fair - part 3 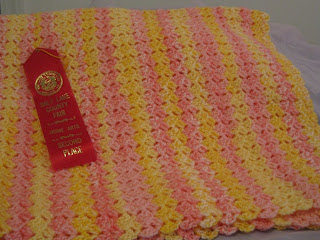 The last of my not-tatting entries is this crochet baby afghan. Good thing it got a red ribbon -- none of the others would have matched. I don't really like yellow or colors with yellow tones, but this yarn practically screamed "Buy me! Buy me!" It's really soft and crocheted up in my favorite pattern (actually the only one I use for baby afghans) it looks like tropical sherbet to me. Anybody want a spoon?

This was made for another tatter who's expecting a small person to expand her family pretty soon. I couldn't send it until after the Fair -- and now I can't send it until it gets washed in some nice mild soap. Don't want Fair dirt on a new baby!
Posted by Marty at 5:00 PM 4 comments:

Ribbons from the Fair - part 2 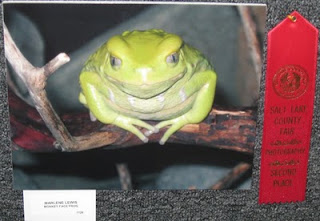 Another piece of not tatting -- and I got a red ribbon (that's a second place)! Amazing for a point-and-click picture taker (no way can I use the word "photographer").

This little guy is a Monkey Face Frog. I took his picture at the California Academy of Sciences in the Rainforest exhibit. He doesn't look much like Kermit or Froggy (my favorite frogs), but he does look like he's smiling.

I'm adding him to my frog collection corner -- instead of the shelf, he's going on the wall.
Posted by Marty at 5:00 PM 3 comments:

Ribbons from the Fair - part 1 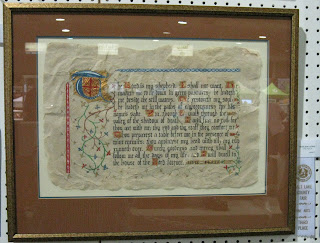 Okay, it's not tatting, but this is my third place piece of calligraphy. I made the paper, too -- out of old paper -- that's why it's rumply looking. It's supposed to look old.
The judge said it was entered in the wrong area and it "just broke her heart" to have to judge it against the paintings. It should have been entered in Creative Arts where it would certainly have taken top honors (uh-huh, prob'ly because there wasn't any other calligraphy entered). Well, I did try that but the Creative Arts people told me because it was framed it had to be entered in Fine Arts. The Fine Arts lady wasn't there, but her daughter who was doing the scrapbook entries took it in. Wouldn't you know...tatting and calligraphy, the forgotten (but not lost) arts. I should have learned to sew!
I don't do this often anymore, so I doubt I'll be entering any next year. That's okay. I've hung this back in my office and the wall looks finished again.
Posted by Marty at 8:07 PM 8 comments: