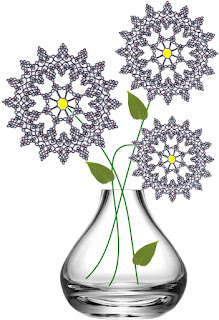 Gina Brummett, The Tatting Goddess, has moved on to a more ethereal tatting world.  Those of us left behind in this earthly one will miss her clarity of expression, her humor and her talent.  Heaven must be a comfortable chair, good light, beautiful shuttles, non-tangling thread and plenty of time to use them.


Gina gave so much to the tatting community through her blog and all those many encouraging comments she left sprinkled all over the 'net.  Reading her blog has been a regular habit and such a delight, especially seeing her progress in re-interpreting old patterns using new techniques.

You will be missed, Gina.
Posted by Marty at 9:21 AM No comments:

Email ThisBlogThis!Share to TwitterShare to FacebookShare to Pinterest
Labels: memoriam 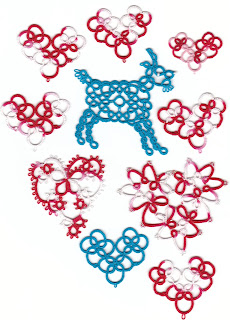 Have you all been participating in Jane's TIAS?  Again this year, she fooled me.  Of course, that's not too difficult.  I was convinced at one point that I was making a blue kiwi.  Funny thing, mine looks like a goat -- just like everyone else's!  Between the pieces of the TIAS I made hearts.  After all, it is getting close to Valentine's day.  I could send some old goat a heart, couldn't I?
All but one of these items are made with Lizbeth size 20 thread.  The one exception is the little pink and red heart in the upper right, which is made with size 50 Omega thread.  That was torture, let me tell you.  I don't like this Omega thread:  it twists, it's fuzzy, it's got bumps and slubs, it doesn't slide, and it breaks very easily.  I can crochet with it, but this is the third time I've tried it for tatting and it just makes me grumpy.
The goat pattern is, of course, Jane Eborall's latest TIAS.  The whole pattern, with the nanny goat as well, it available on her website.
The six hearts that are the same pattern as the blue heart came from somewhere on the web.  I know I must have seen a picture somewhere while I was a work, because the only pattern I have is a scribbled pencil drawing on the back of my business card.  I wish I knew where it came from so I could give somebody credit!
The spiky-looking heart with glass beads is an adaptation of Iris Niebach's doily Cornelia.  I adapted that one two years ago, but didn't write down the stitch counts or anything.  I was going to put it into a bangle, but using size 20 thread, it's just too big. I've made another one in size 40 Lizbeth Red Burst which I am going to put into a bangle.  I didn't scan it with these because I've left the woven in ends long until I've got it stretched into the bangle.  I wouldn't want them pulling out and coming apart.  I'll trim the ends when it's done.
The other heart is an unblocked version of Irene Woo's Butterfly Heart.  I got the pattern from Le Blog de Frivole and didn't have enough integrity to throw it out after she removed it from her blog as a possible copyright violation.  I've only made this one, though.
Posted by Marty at 7:49 PM 2 comments: