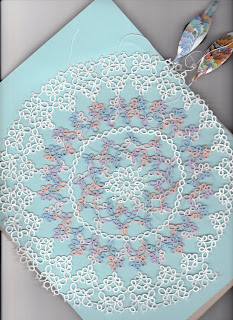 I have to report not much progress.  I've nearly replaced the round I cut off -- only another 7 repeats to do.  The green snowflakes (from the last post) interrupted progress, but so did the book I've had my nose stuck in lately, and work.  I even worked on Saturday. Bleah.

You can see what a mood I'm in -- Laziness Prevails!  I dropped this on the scanner.  The first scan was a really blurry mess.  Did that inspire me to take a nice photo?  Nope, it inspired me to put a piece of cardboard on top of the blue paper then a stack of disks on top of that so the lid would press down on the doily without trying to flatten the shuttles.  Yes, I could have just pulled the shuttles out of the lid, but I was too lazy. *snicker*