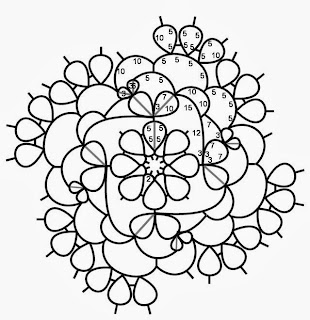 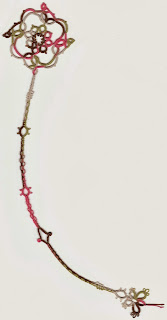 The thread Marie sent for the shuttle exchange was completely used up making this swirl square bookmark. The Swirl is a pattern I made up more than a year ago. It has more rounds than this one, but I didn't want to use up all the thread before I got the tail made, so I only did three rounds. The tail is pearle tatted. I like doing that because it's a chance to just fiddle with the thread. No rules, and any pattern or non-pattern will do.  OH -- I forgot to say this was also made with my new hand-carved shuttle from Marie.  It really holds a LOT of thread!  It's just the right size for my hand and even though it's smooth, it doesn't slip out of my fingers.  It's lovely!

This one might go to my niece's teacher for Christmas. I offered her one of the Christmas mouse bookmarks, but she's pretty certain her teacher doesn't like mice.
This is also the same motif I used for Diane's doodad challenge. I said then I'd post the pattern. Uh-huh. It's been more than a year, but I do have a .pdf of the file. I've put it in Keep & Share but I only have a trial account, so I hope it works.  If anyone is interested better get it soon.  ☺
*sigh*  It has been pointed out to me that I uploaded the .psp file instead of the .pdf file.  I fixed that, so it should be okay now. Ooookaaayyy--apparently I'm doing something wrong.  I think it's fixed so anyone can download it now.  If someone would try it and leave me a comment if it works, I'd appreciate it.
Posted by Marty at 6:20 PM

WOW...that looks great. Did you use your new shuttle?
Marie

Love the swirl pattern but couldn't read the document because its in psp format, so just printed the pattern from your post. Thanks!!

Oops! I've fixed download link to go to the .pdf pattern instead of the .psp diagram. Thanks for pointing it out.

I love the sense of movement in the swirl pattern - good name! Thanks. I'm off to look for the pdf pattern.

I love this pattern and thanks for sharing, only it would not let me have it as I don't have an account.
Margaret

The link worked for me!. Thanks for the pattern.
I like the bookmark.

I was able to read it and print it off - beautiful pattern thank you for sharing :)